A COUPLE’S TRAVEL LOGS ENSURE THAT THE MEMORIES OF A LIFE LIVED RICHLY WOULD NOT BE POORLY KEPT.

Photos and story by Grant Loveys

Memory is a tricky thing.

Maybe you can remember all kinds of random things – which hockey player scored the most goals in the 1977 playoffs, or what colour socks you wore on your first day of school – yet not be able to recall the details of more important events in your life. It’s easy enough for most of us to look back fondly on the best times of our lives – romantic moments, exciting vacation destinations – in broad strokes, little scenes that have implanted themselves in our minds forever. But could you recall the number of the hotel room you stayed in on a vacation five or 10 years ago? Unless something really remarkable happened there, it’s unlikely.

But not so for Seal Cove’s Beulah and Gordon Morgan, two world travellers with a very special kind of memory bank. The Morgans have been everywhere – every Canadian province (multiple times), over 30 of the United States and numerous European countries. They’re also history buffs, planning their annual trips around historical sites they’d like to explore. Gordon enjoys American history, particularly the famed sites of the American Civil War, so they spent time in places like Gettysburg, Pennsylvania. Beulah enjoyed the wide open spaces of Little Bighorn in Montana, the site of General Custer’s last stand during the American Indian Wars of the 1800s. Having travelled roughly once a year for the past 49 years, they have many, many fond memories of past vacations.

The thing that makes the Morgans’ memories different, however, is that ever since their first trip, Beulah has kept a collection of “logbooks,” dutifully recording every minute detail of each trip: the daily weather conditions, miles travelled, accountings of everything purchased (even down to spare change they used in a payphone), their movements, their meals, short anecdotes from each day, and so much more. Naturally, she’s included cards from businesses they’ve patronized, receipts, menus, photos, postcards, ticket stubs, and so on – all neatly ordered in accompanying photo albums. The depth of detail and the sheer size of their collections are truly staggering, and endlessly fascinating.

Selecting a logbook at random from one of many boxes, Beulah pulls out a tattered notepad dating from 1967. Their second trip. Its pages are yellowed, and it bears the scars of both long miles and years of being thumbed through, but when she opens the logbook and begins to read, the memories start flooding back. “1967,” she says. “Ok, here we are. We left home with $355. I think we brought back $25, didn’t we?”

Gordon laughs. “I think so.”

She moves her finger down the page, scanning the neat, compact writing. “We had a flat tire that time, but we haven’t had many flat tires – in all those [49] years, we only had a couple. Two, I believe. And we broke down twice,” Beulah says.

That prompts Gordon to remember, “Yes, we broke down in Nova Scotia.”

As she reads, her notations act as a guide, coaxing from the tiniest detail memories the Morgans might have otherwise forgotten. It’s like magic. “Let me see – we’re in the [Marine Atlantic, then CN Marine] terminal now. We’re going to Ontario. Up through Quebec, Drummondville.” All this in the present tense, as if she’s back there, some 45 years in the past.

As you might imagine, Gordon and Beulah do a lot of driving, meaning they’ve also done a lot of sailing with Marine Atlantic. In fact, on September 28, 2014, they made their 72nd crossing. They’ve sailed aboard every ship Marine Atlantic has ever used and, naturally, have copies of every receipt, ticket and room card they’ve ever been issued.

It’s a way of keeping time at bay, essentially. As the years pass, memories fade, but the logbooks bring them all back. “Indeed I do [take them out and look at them],” Beulah says. “Every now and again we’ll say, ‘Now where were we when…’ or ‘What year did so and so happen,’ and it’s all right there.”

Flipping through a photo album crammed with photos, receipts, business cards and other interesting souvenirs from a trip to the American South in the 1970s, it seems impossible for Beulah and Gordon to simply look at the information without a dozen old memories popping up. She turns the page and Gordon recalls stopping at the Welcome to Virginia road sign to take a picture – a must in any state they visited – and being amused at a local’s thick southern drawl when he stopped to ask them if they needed assistance. “Is that the time I nearly ran over the snake?!” Beulah says, her eyes suddenly widening. This is how it goes. Memories spooling out, stories beneath the surface being pulled up into the light.

The Morgans’ logbooks also function as a kind of time capsule documenting the changing times. In that first logbook, a tank of gas cost a little over $3, and a hotel room for a night in Stephenville cost $5. Hotels and restaurants have come and gone over the years, along with their own cars. To flip through the logbooks is to watch the entire Morgan family – Gordon, Beulah and their children – grow before your eyes.

And though their children, now having children of their own, may no longer pile in the backseat with them on their annual trips, Beulah and Gordon have never stopped travelling. The two of them plan their trips in the winter and set off in their car in the summer, taking turns in the driver’s seat to cover the miles as they discover another part of the world or revisit a place that had treated them well. A couple of wanderers ticking off the miles, making memories. 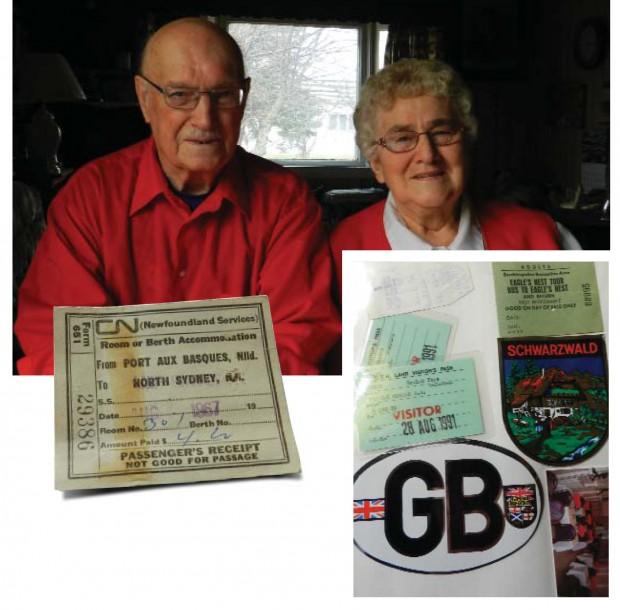 x Your browser is no longer supported and some features may not be fully available. Please consider upgrading for more security, speed and the best experience on this site. Hide Options Show Options
Edge
Microsoft
Firefox
Mozilla Foundation
Chrome
Google
Opera
Opera Software